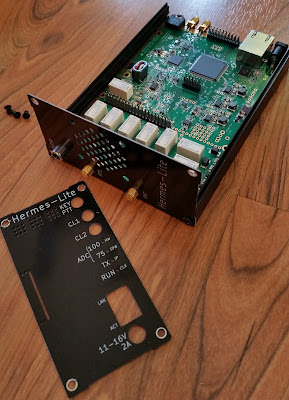 Minor assembly required.
The Hermes-Lite can listen on an unlimited number of virtual receivers which can concurrently monitor 4 bands at up to 384 kHz x 4 total bandwidth.

HF digital modes allow many simultaneous transmissions to fit into a relatively narrow slice of bandwidth.
The receiving capability of the Hermes-Lite coupled with specialized software and the processing power of the computer allows for monitoring a significant chunk of the HF digital mode frequency range using a single radio.
It is somewhat intensive for the PC and LAN.

I was initially using a 2014-vintage i5 laptop which handled it but was a bit strained and the cooling fans were noisy in that state.  Since then I have switched to a i5-3470 desktop machine which handles it better and with less noise.  I am seeing about 2.5 TB/week (45 Mbit/sec) of data transfer between the HL2 and SparkSDR in the above receiver configuration with 192 kHz sampling bandwidth. The gigabit LAN has plenty of capacity left.
24/7 automated decoding of these signals contributes to an online reporting database allowing visualization of world-wide HF propagation activity:


On Raspberry Pi 4:
The Raspberry Pi 4 May be comfortably usable with up to about 4-6 receivers.  Of note is the fact that VNC server uses a significant amount of CPU.  I already disabled the "waterfall summary" for each virtual receiver with some CPU savings, but it seems driving the waterfall graphics adds a significant load especially over a remote connection.
Posted by Eugen at June 15, 2020